In 1950 the Veterans of Foreign Wars formed a special corporation to administer property or erect a memorial within the Town of Highlands. Three years later, the post decided to sponsor a town ambulance corps, with the idea that the corps would be a living memorial by its humanitarian service. Accordingly, the corporation name was changed to the Town of Highlands Ambulance Corps, Inc. The directors of the corporation were all members of the VFW, while the corps membership was made up of volunteer men and women.

The community need was finally decided on in 1953 when the Town of Highlands Ambulance Corps was organized and sponsored by the VFW post. A used Packard ambulance was purchased, repaired and equipped for service. About 20 members of both the VFW and its auxiliary, together with other members of the community, trained at first aid classes and qualified to become members of the corps. 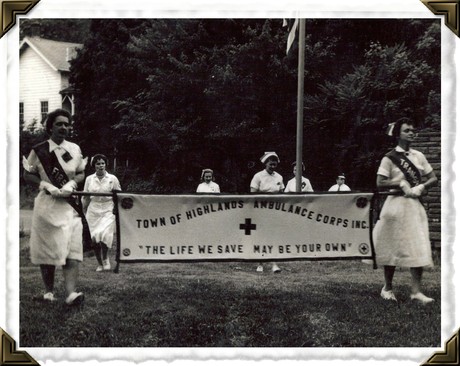 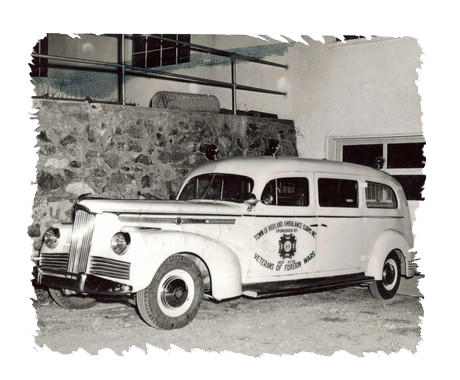 Thus began the history of the Ambulance Corps. Headquarters was established in the basement garage of the Feme’s Motors on Route 9W, where it had remained through the cooperation of William Brunelly. But several years later the corps added another ambulance to its equipment, along with many other items of emergency apparatus, and membership in the corps increased along with the increased demand for its services. A larger headquarters was needed. 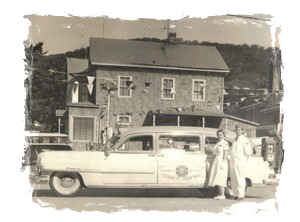 During the same period, the VFW post also had problems. With no meeting place of its own, it was forced to hold meetings where space was available. Therefore, both organizations had a similar need for added facilities.

Mr. Zint turned over the deed to a 50×100 foot lot near Cragston Lake to Joseph J. Selby, VFW Commander and chairman of the board of directors of the Ambulance Corps., at the VFW annual installation dinner which was held at Stroppel’s Restaurant . (which is now the Hacienda). 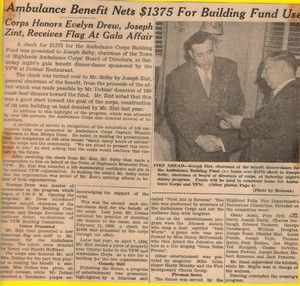 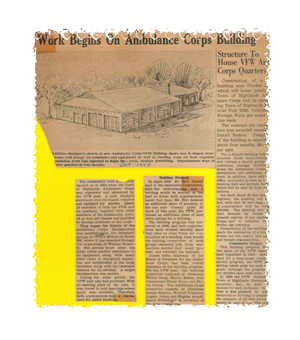 Treasurer of the special corporation Norman Drew cautioned the members that despite Mr. Zint’s generous gesture, the fulfilling of the idea of a VFW-Ambulance Corps building would still require a lot of work. There are many problems still to be solved, he said. The land must be cleared and funds must be provided to erect the building itself.

So the fundraising began.  Hundreds of dinners were served.  Bake Sales, monetary donations, donations of lumber, stones, cement, and concrete blocks.  Donations of skilled and unskilled labor.  In this activity the women of the ambulance corps worked side by side with the men of both organizations.

On May 10th, 1958 ambulance corps captain Joseph Zint, who originally donated the land on which the building stands, unveiled the corner stone at the new VFW/Ambulance corps building.  After that, Chairman, Joseph Selby of the joint VFW/Ambulance Corps building committee presented keys to the building to Mr. Zint, VFW Commander Elmer Poore, and VFW Auxiliary President Evelyn Volkner.  And the new building was proudly open for inspection.

The dedication ceremonies concluded three years hard work by the two organizations, which will share it.

First planned in 1956, the building was started that Fall after long and hard work on fund-raising campaign that made its construction possible.  Much of the actual work on the building was done by volunteers from the two organizations and the community.

The original building still stands on the donated property and continues to be home to the VFW and Town of Highlands Volunteer Ambulance Corps. 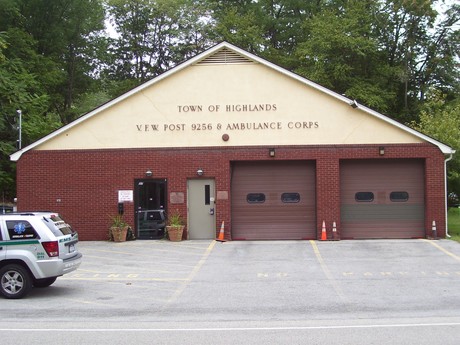